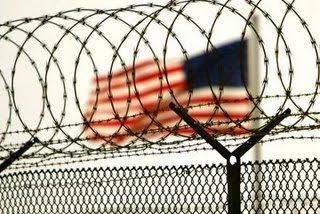 Tea Baggers and on-air personalities who have threatened President Barack Obama with death are 'Domestic Terrorists' as defined by the U.S. Patriot Act. Threats against Obama are up 400% over those against Bush and according to many sources, the Secret Service is not able to keep up. A recent exchange on YouTube convinces me that it is time to to deal with lawless tea baggers while making a point about the rule of law. Those threatening the life of the President have, in fact, sought to '(i) intimidate or coerce a civilian population; (ii) influence the policy of a government by intimidation or coercion'. That means that threatening the life of the President is an act of terrorism.

Section 802﻿ (Pub. L. No. 107-52) which expands the definition to cover "domestic". terrorism " ...if the act appears to be intended to: (i) intimidate or coerce a civilian population; (ii) influence the policy of a government by intimidation or coercion ..."

The Southern Poverty Law Center says that the U.S. has seen a 35 percent rise in hate groups in recent years, and few doubt that the discontent stirred up over the election of an African-American president is fueling the rise in threats. But, could the influx of modern technology also be to blame?

As the cost of computer technology has fallen (and accessibility to high-speed Internet service has spread), more and more people are spending more and more time online. Accordingly, these people are doing what people often do on the Internet: sending emails, communicating in chat rooms and on social networking sites such as Facebook and MySpace, watching YouTube videos, etc. According to results of a recent study by the Simon Wiesenthal Center, these activities seem to be enhancing the scope of extremist groups' reach:--Report: Secret Service strained to protect Obama

America is as divided now as was England between Protestants and Catholics during the reign of Elizabeth I and, later, James I. James had promised a crackdown after Guy Fawkes tried to blow up Parliament, an act of terrorism. Overt threats to Obama are, in fact, acts of terrorism as defined in the U.S. Patriot Act.

True to form, just like I called it, even before the New Year could began in earnest three more Black men were lynched in America. Somehow, just saying I told you so doesn’t really do it for me. On New Year’s Eve, Johannes Mehserle a White police officer shot Oscar Grant Jr. a 22 year old Black man in his back, killing him instantly as he lay prone and unarmed on a train platform in Oakland California. The incident was caught on tape. It became just the latest public lynching of a Black man in the United States, and it sparked several days of angry rebellion.1

On that very same day, in Bellaire Texas a police officer shot the 23 year old son of Bobby Tolan, a once famous professional baseball player. Robbie Tolan ended up with a bullet lodged in his liver, only because as he stood in the driveway of his own home, a White police officer simply assumed that the car he actually owned was a stolen vehicle.2 Then, hours later on New Year’s Day, nine police officers in New Orleans discharged their weapons 48 times and put 12 bullets into the back of yet another young unarmed African American man; 22-year-old Adolph Grimes was shot dead in a hail of gunfire just a few feet away from his grandmother’s home. A total of 14 bullets pierced violently through his body. ...

All that it requires is the will and the means to take someone’s life. Now, with the election of the first Black man to the highest office in the land, it appears as if some White people across the country have simply lost their minds.--Death Threats Against Obama - Racist Atrocities Soar As America Regurgitates Its Soul

How many have been preventatively detained at an Astroturf Protest and how many at real ones.

A man was convicted of making a terrorist threat due to a poor choice of joke material (a burning bush) just prior to the arrival of George W Bush on a visit to South Dakota in 2002. Just a few weeks ago, a Florida man was convicted of threatening harm to Barack Obama. It appears that the law is being applied somewhat equally in these instances, thus establishing the precedent to do what you propose.

I get your point about doing something to curb the threats. That said perhaps taking them to court isn't the best solution. Convictions under Patriot Act would establish precedents and case law that could be used against the many of us who simply disagree with the crimes our government is committing against we the people every hour of every day. Just a thought worth considering. Keep up the good work!

The Patriot Act was written for us the hippies and pinkos and darkies, not for the John Birchers at the Tea Parties.

The other thing you see at the real protests are plainclothes cops agitating to give the Storm Troopers an excuse to take names, arrest folks, and bash heads. Not neccessarily in that order.

Always something interesting on your blog.

I think what your new post may really illustrate is that the current definition of "terrorism" is completely bogus.

In the waybackwhen, a "terrorist" was someone who used violence or the threat of violence -- especially violence marked by extraordinary cruelty or barbarity against innocent persons -- in order to force them to do something they had a legal right NOT to do, or to keep them from doing something they had a legal right to do, usually for some political purpose.
For example, when the KKK fire-bombed and lynched, and burned warning crosses in yards to keep black folks from voting, THAT was terrorism.
And when you, say, bomb people enforce "sanctions" against a civilian population in order to effect a "regime change," that's terrorism, too.

Threatening the President?
Nope. Wouldn't qualify.
For one thing, he's a public official, not an "innocent" person.
Under criminal law, it might be menacing or something of that nature. But "terrorism?"
Please.

I don't see the point in calling EVERYBODY a terrorist. Kind of clouds what a REAL terrorist is -- unless clouding the issue IS the point.

Seems like anybody who breaks wind during the National Anthem is a terrorist now.

I suspect it's a deliberate mis-use of the term to trigger an emotional response. Now, why do that?

One thing I know: when you have a winning hand, you don't have to cheat.

It appears that the law is being applied somewhat equally in these instances, thus establishing the precedent to do what you propose.

Keep in mind, that I never supported the Patriot Act, Bush's sop to his phony war on terrorism, a tool by which he might shut up his opposition. But --as long as that repugnant piece of crap and bad law is on the books, it MUST be applied equitably. When the US becomes sane again, repeal it! But --alas --America will never be sane again short of a miracle. The age of miracles is over.

The Patriot Act was written for us the hippies and pinkos and darkies, not for the John Birchers at the Tea Parties.

The crooks, liars and idiots of the GOP thought that it was as you describe and will be sorely suprised when 'they' are rounded up, charged and put on trial for terrorism.

At least one has ALREADY been arrested, tried and sentenced.

I don't see the point in calling EVERYBODY a terrorist.

There is no point in calling everybody a terrorist. But neither is there a point is calling NO ONE a terrorist who has violated the law. Now --as I pointed out: I have never supported the Patriot Act. The POINT of this article is that the ONLY people in violation of it are the right wing nuts who proposed and supported it!

I suspect it's a deliberate mis-use of the term to trigger an emotional response. Now, why do that?

That's not my problem. I say: if you are NOT going to arrest, charge, and sentence the STUPID FUCKERS who are breaking it, then lose the law! No law that is NOT ENFORCED need be on the books!

I didn't like the panicky implimentation of the Patriot Act from the get-go. But, as has been mentioned above, if it is good for a few then it is good for all. Equivocation, obfuscation, hypocrisy, and hyperbole are the real enemies here. Root them out and shine light on them wherever/whenever they rear their ugly heads.

Such laws are unconstitutional on their face and de facto invalid.

Following was posted by "anonymous" but inexplicably did not show up here:

"Majority banks offer basic banking facility while using
account including direct deposit of the salary and wages and pay in cash or cheques or create standing orders to spend various bills my website be guaranteed
to talk in your bank to see what things you'll be able to do to remain protected."