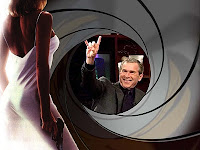 Al Qaeda was a U.S. creation, specifically a product of inverted right wing psuedo logic. If 'al Qaeda' did not exist, never mind --the shills would invent it and cite it to justify wars abroad, crackdowns on freedom at home! They would bestow upon it a virtual existence via press releases, propaganda and outright lies --deliberate attempts to mislead the American people!

Bin Laden should pay royalties to the U.S. right wing if, indeed, he ever benefited from his new found celebrity, his holographic 'creation' by the mass media, his elevation to arch-enemy status! His is falsely characterized as the 'mega-terrorist' brain behind a sinister world terrorist organization resembling an octopus with tentacles in every real or fictitious terrorist attack. There had not been anything like it since Bond fought SPECTRE --an evil terrorist organization specializing in terrorism and extortion. In the Bushco rewrite the part of Blofeld is played by Bin Laden.

It was a crock!

It was the CIA which bestowed upon Bin Laden himself his near mythical image of sinister master terrorist who commanded a vast world wide network from deep inside a cave in Tora Bora. This was all really, really bad fiction. Many Hollywood producers would have laughed out of their offices anyone daring to pitch it! It was, it seems, a very, very bad rewrite of Ala Baba and his 40 thieves. Ali, like Binny, lived in a cave but --alas --did not have cell phones. But neither did Bin Laden. 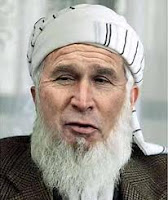 The immediate acceptance of the Bush official conspiracy theory proves the diminishing IQs of those who insist upon believing it. The consolation is this: the CIA has no future in Hollywood!

According to the official version of the lie (charitably: the 'myth') goes something like this: the CIA and the Saudis are said to have funded and armed Bin Laden throughout the 80s. His mission impossible: wage jihad against the Russian occupation of Afghanistan. In fact, Bin Laden was working for the CIA.

Simply --Al-Qaeda means 'the base'; in this case --the computer data base of thousands of mujahideen trained and recruited by the CIA. The mission: defeat the Russians. This is cold war James Bond stuff and, in some cases, a just a bad rewrite. Life imitates spy movies.

The problem has become apparent over time: Washington did not know what to do with this 'database', this network that had become obsolete with the dissolution of the Soviet Union. It obviously never occurred to DC spooks and/or analysts that with the withdrawal of the Soviet Union, Ala Baba, uh, Bin Laden would focus upon U.S. imperialism throughout the Middle East! But did he? More likely --he was just the convenient scapegoat for an inside job that would become the pre-text, the boogie-man to be cited as justifying a war for the oil resources of Iraq, the poppy (opium) resources of Afghanistan.

The source for how 'al Qaeda' got its name is Sir Robin Cook, the former British Foreign Secretary. In order to protest the British connection to this sorry story, Cook resigned his job.
Benazir Bhutto: Bin Laden was Murdered
Posted by Unknown at 3:50 AM

More like 1984's Goldstein; with BushCObama pitch-slapping the myth out of the park into Oceania/Airstrip1/NATO's Eurasia. And all on behalf of Poppy, the CIA's alpha and omega of this petroleum/opium pipe-line!

FYI
'In an excusive interview with Al Jazeera, Assange said only a meagre number of files related to Israel had been published so far, because the newspapers in the West that were given exclusive rights to publish the secret documents were reluctant to publish many sensitive information about Israel.

“There are 3,700 files related to Israel and the source of 2,700 files is Israel. In the next six months we intend to publish more files depending on our sources,” said Assange in the nearly one-hour interview telecast live from the UK.

Asked if Israel had tried to contact him though mediators, Assange said, “No, no contacts with Israel but I am sure Mossad is following our activities closely like Australia, Sweden and the CIA.

“The Guardian, El-Pais and Le Monde have published only two percent of the files related to Israel due to the sensitive relations between Germany, France and Israel. Even New York Times could not publish more due to the sensitivities related to the Jewish community in the US,” he added.
http://www.thepeninsulaqatar.com/qatar/136564-wikileaks-to-release-israel-documents-in-six-months.html

Thanks for the great comments. I have been hopeful that among the FILES 'leaked' to Wikileaks would be MORE evidence of CIA crimes, crookery and crocks. I have long been convinced that the CIA (with help) murdered JFK and among the many motives was his PLEDGE to '...smash the CIA into a thousand pieces." Other motives involved his 'war' on 'Secret Societies', his pledge to DISMANTLE the FED, and rescind the OIL DEPLETION ALLOWANCE.