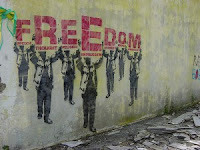 Democrats are unhappy. I daresay most criticism of President Obama these days is from the left wing --not the GOP! Much of this criticism of both party and the President is misplaced. As old West Texans might have said: "They would complain if they were being a hanged with a new rope!"

I daresay neither the party nor the President are responsible for conditions creating most of this 'unhappiness'. Primarily, I am reminded that just 1 percent own more than the rest of us combined. That outcome is not the result of Democratic policy but of GOP tax cuts going back to Ronald Reagan whose legacy it is. I am reminded that the Military-Industrial Complex has apparently set up shop on K-Street! But --I wonder --was this not noticed when it happened under Herrs Reagan, Bush and Bush?

As it was said in W. Shakespeare's 'Julius Caesar': "The fault dear Brutus lies not in our stars but in ourselves that we are underlings!" That is not said to absolve the Republican party of its many sins. It does mean that we should think clearly about a President who may not have 'undone' Bush as quickly as we might have preferred. It means that we should be loath to make the wrong reforms of the right party.

Until these 'conditions' are changed and until MONEY is taken out of the equation, there is NO point in talking about '3rd Parties' which have the effect of splitting what little is left of the left when the GOP has sucked up all the campaign monies from elites for whom DEMS are but a hedged bet!

I have been writing about the transfer of wealth upward since the Reagan years. I witnessed the effects of much of that in Houston where, even in 'boom town', tent cities sprang up in parks, open spaces, under overpasses. The Reagan 'Recession' was clearly the worst recession/depression since the GOP-HOOVER Depression of the 1930s. There has been a 'recession' under every GOP regime since. Even Eisenhower (whom I called the last 'honest' Republican) presided over a recession/depression. By the way, the words 'depression' and 'recession' are synonyms, though folk think 'Depressions' worse. Bottom line: every Democratic President at least since WWII has presided over greater job and GDP growth than any Republican President.

From time to time you hear names of parties ---progressives, libertarian et al. Third parties have a disastrous history in the United States. That is because only the very rich have enough money to help finance campaigns of either party. Most money is concentrated at the top --the so-called 'ruling elite' of just 1 percent of the total population. This 'elite', as a result of Reagnomics specifically, owns more than the rest of us combined. To be expected, this 'elite' will vote the party that made them richer than almost everyone else in the United States. They will vote GOP.

The responses to this outcome have been irrational. Some propose that the opposition to this state of affairs be diluted even more than it already is with third, fourth, fifth parties. That's not smart! Others propose that Democrats might get more votes following a name-change. The usual suspects make the rounds: "progressive" being used from time to time to identify various shades of liberal and/or democrat. None of these 'movements' are viable because none of them have access to money!

There is no need to change the name of the 'Democratic' party. The name comes from the Greek --'demos' --for 'people'. Now --the word 'liberal' is from the Latin 'liber' for 'free'. Therefore, I am a LIBERAL DEMOCRAT. What fascist is going to convince me that there is something wrong with being FREE PEOPLE?

The Military-Congressional Complex
Posted by Unknown at 6:24 AM

"We" should be together. If you can remember where you were on November 22, 1963; we should become the Eternal Flamers (EF'ers, if you will) and unite to rid this country of the responsible Bushists, including BS (Bush Shadow) Obama!

Anonymous, indeed! It's not that difficult to figure out when and how this country began its slide into oblivion. As Houston Mayor Fred Hofheinz told a news conference in Houston: 'There is something rotten in Houston!' He got that right!