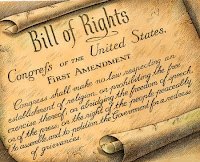 by Len Hart, The Existentialist Cowboy
Why has the right wing apparently succeeded in stacking SCOTUS with 5 justices who have in common their disdain for the work of our founders? They succeeded for several reasons:
Texas is a case in point. Prior to the arrival of the Bush crime family, one could get a good education in Texas. I would like to think that I am but one of millions who are the living proof of it. Bush/Perry, however, were more interested in the profits that 'private education' might make if declining test scores in the public systems were ignored. The 'private schools' are profitable but serve the ruling elite. Everyone else is expected to resort to crime and thus fill the gulag of corporate-owned prisons.
Recently, Karl Rove 'demanded' to know who gave us the right to occupy our country! Rove has apparently never heard of the Bill of Rights. I will be happy to educate Rove. In fact the Bill of Rights to the U.S. Constitution does not 'give' or 'grant' those rights; it merely affirms the rights that all of us enjoy by common law.
I suggest Karl Rove read John Locke for a start. By 'common law' we have the right to speak, dissent, protest, criticize and, in every other non-violent manner, hold every politician --from elected dog catcher to President --accountable to US!!

Though he was not a 'founder' in that he was not among the delegates to the Constitutional Convention, Thomas Jefferson wrote of the right of people to abolish tyrannies, the right to abolish those governments failing to uphold their end of a 'social contract', a 'convenent' between government and people. Governments failing those responsibilities are in 'breach of contract', the 'social contract' which is, in fact, its only source of legitimacy.
Every philosopher who is connected in any way with what is called the 'englightenment' has held that when the 'government' i.e, the 'hired hands' who run it from day-to-day violate the terms of this 'social contract', it is the right of the people to 'abolish it. To wit:

We hold these truths to be self-evident, that all men are created equal, that they are endowed by their Creator with certain unalienable Rights, that among these are Life, Liberty and the pursuit of Happiness. That to secure these rights, Governments are instituted among Men, deriving their just powers from the consent of the governed, That whenever any Form of Government becomes destructive of these ends, it is the Right of the People to alter or to abolish it, and to institute new Government, laying its foundation on such principles and organizing its powers in such form, as to them shall seem most likely to effect their Safety and Happiness. Prudence, indeed, will dictate that Governments long established should not be changed for light and transient causes; and accordingly all experience hath shewn, that mankind are more disposed to suffer, while evils are sufferable, than to right themselves by abolishing the forms to which they are accustomed. But when a long train of abuses and usurpations, pursuing invariably the same Object evinces a design to reduce them under absolute Despotism, it is their right, it is their duty, to throw off such Government, and to provide new Guards for their future security.

--The Declaration of Independence [authored by Thomas Jefferson; bolding mine, LH]

The nimrods in Washington D.C. to include all of K-street, the gang of lobbyists as well as paid liars like Karl Rove and numerous 'elected' representatives should go back to school. I suggest that their first course be entitled: HUMILITY with various lessons to include:

The people are the final jurors. We, the people, are tasked with deciding whether a particular government shall remain or be replaced. Jefferson and the founders as well believed that that was our right! I have, at this point, given up on a corrupt establishment, controlled as it is by the ruling elite of just 1 percent of the population. I have given up on the 'community' of 'legal abstractions' called 'corporations'! Enough! It is time that the people be heard! A new broom sweeps clean. All things must pass!
The time is near, perhaps arrived, when the people must re-establish as matters of law that:
Our so-called 'government' --at least since Ronald Reagan --has failed the people. The Constitution is paid lip service. The Bill of Rights is reviled. The needs of the people are ignored. The environment is considered the preserve of corporations. Corporations are given 'rights' though they are not and never will be people. The coming revolution has a long list of wrongs to be undone and crimes to be punished.
Posted by Unknown at 4:38 AM

H.L. Mencken, with a rather jaundiced eye upon popular democracy, predicted that the lowest orders of humanity would eventually be the only ones succeeding in this machine system of electoral farce.
I am not alone in the feeling that I no longer live in the country of my birth. Money and militarism now rule, with shallow lip service to any sort of ideals of liberty or justice.
Until the mob recognises that there is no compromise possible with acquisitive capitalism, we are doomed to keep up the polite attempts at "reform" and "compromise" which are the hallmarks of a "mature" or "realistic" approach to political discussion.
Bull.
The system is built upon exploitation and death, with the profits going one way.
It will get worse before it gets better, whatever that improvement may be.
Don Smith

I am not alone in the feeling that I no longer live in the country of my birth. Money and militarism now rule, with shallow lip service to any sort of ideals of liberty or justice.

I am sure millions share your perspective, your feeling. We might have seen this coming. When I was in elementary school, 'wingnuts', inspired by McCarthy, dared to target loyal Americans for merely opposing his prejudices, his mental constipation. I've had enough of it! At this point, anyone questioning my loyalty, gets his stupid ass KICKED! BTW --I am of Native American descent. Those who would demand of me some stupid loyalty oath should just GET THE FUCK out of the nation of my ancestors.

You're right again when you state that 'the system is built upon the exploitation of death'. Indeed --these days 'death and destruction' are our major if not ONLY exports. We are a net debtor nation, occupying dead last on the CIA's World Fact Book with the world's LARGEST negative Current Acct Balance, formerly called the Balance of Trade Deficit. Hu is on top? CHINA!!!!! Thanks to near treasonous deals cut by Bush/Nixon, the U.S. has become a vassal state of China, a dumping ground for its cheaply made shit.

As always Len, precise and salient facts of the North American condition. Those who profess the virtues of our nation's idioms of 'freedom' & 'independence', only do so in a way that assures their further acquisition of it's community wealth, all the while systematically demonizing any opposition to their parasitism.

I agree, many Americans find themselves wondering how we got here and what to do about it, although several 'progressive' political movements have formed over the past few years, they are no match for the general body politic of either mainstream party, and third party agenda's have not fared well in American politics in acquiring real power. Nevertheless, forward we must go, and no matter if progressive leadership takes hold or not, the weight of this empire will implode in it's own right, history has shown over and over again (as you have pointed out so many times) this kind of corruption never leads to any breakthroughs for humanity. The big question is...will enough Americans wake up to the facts of our condition and deal with this dilemma.

In the mean time, we keep on keeping on...best we can. Your writings should be in every university...in competition with the one sided dogma and hash that is currently dished out, but sadly our 'beacons of higher learning' have sold out years ago to the many associated moneyed interests. Always enjoy your insights and facts, the effort always appreciated from this quarter.

...although several 'progressive' political movements have formed over the past few years, they are no match for the general body politic of either mainstream party, and third party agenda's have not fared well in American politics in acquiring real power.

Indeed! There are several reasons that is true. The most obvious being the huge amounts of money required to just get in the race, let alone win it! Studies have shown time and again that the candidate spending the most money wins! This works to GOP advantage. It is not impossible for a GOP candidate to raise all the cash he needs to 'win' election from only one or two huge donors. The DEMS, on the other hand, have many doors to knock on. To raise a mere million at 10 bucks a person requires contact with 100,000 people. That's just an easy example. In the real world, it's probably even worse than that and only gets worse as more wealth trickles up.

....history has shown over and over again ... this kind of corruption never leads to any breakthroughs for humanity.

You're absolutely right. I have, from time to time, made the obvious analogy to Rome. By the time, Rome was sold at auction to Didius Julianus, the sesterces was all but worthless, a mere 'head count' device for those coughing up one to get into the 'games' at the Coliseum. Today --the dollar has value only because and for as long as China finds it advantageous to prop it up. In other words, for only so long as they can continue to dump its crap via Walmart!

good to hear from you, benmerc. Hang in there.

My interpretation of that statement is: 'You can NEVER fool mother nature' (not for very long...)

Indeed! Truth will stand up to scrutiny, is consistent with other truths, and stands the test of time. Or --as has been said: '..truth talks; bullshit walks'.

"The coming revolution" is what elections are supposed to replace. Vote for a Democratic government and a lot of these ills will be taken care of.