Social Security Should not be CUT by so Much as a Dime!

SS should not be CUT --it should be strengthened! If there is a shortfall, send the bill to the 'ruling elite' which has gotten filthy rich with all sorts of 'tax' avoidance schemes that the middle and poorer classes could only dream about! Elite money winds up offshore; but SS is a boon to the economy.

What's up? Has no one bothered to read John Maynard Keynes? 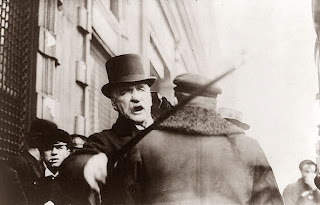 Cutting SS would plunge the nation into depression as a result of the LOST PURCHASING POWER of seniors who will be reduced to penury! Many have already been reduced to shopping at Wal-Mart, that retail 'agent' of China! What's next? A caning by J.P. Morgan?

Sorry --Obama this whole thing sounds like an EVIL GOP plot to me.


"Social Security a moral institution, Democratic strategist James Carville said.
The program has brought the rate of poverty amongst the elderly down from 30% in 1965 to 9.5%, despite a recession.


Rebuilding the middle class by strengthening social programs and cutting health care and education costs is crucial to the upcoming election, Carville said, and many in the Beltway just don't get it.

The middle class won't vote for candidates who want to cut their Social Security to fund wars and bank bailouts, he argued.


--James Carville: Social Security 'is the act of a just and moral nation'

Social Security is a BOON to the economy. Has no one bothered to read John Maynard Keynes? Cutting SS would plunge the nation into depression as a result of the LOST PURCHASING POWER of seniors who will be reduced to penury!

Does anyone believe that the milllions, billions, trillions that the elites have squirreled away offshore is --in any way whatsoever --driving or stimulating this economy? Sad but true --the RULING ELITES have simply exploited the failure of this nation to provide everyone graduating high school with anything more than a smattering of 'Economics' background!

Sorry --Obama this whole thing STINKS! If the budget needs to be 'balanced' take it out of the TRILLIONS that have been warehoused offshore where it does NO ONE any good! I smell a GOP RAT!

Heretical Question for All Democratic parties: On FDR Social Security (SS) and LBJ Medicare and SS Medicaid - Are y'all BiPetersonSheep or DEM?

It is true SS keeps seniors from poverty and as corporations abandon pensions, and for that matter long term employment prospects, it also helps those not receiving benefits now. By allowing seniors to live independently it also frees their children to spend less to support aging parents and frees the children to raise and provide greater opportunities for their children. Short sighted, foolish and politically stupid.

i keep telling people to just give me all the money, but sadly, no one listens. On a more serious note, since this is the obsession of the P Petersen League of Extraordinarily Rich A-holes, what exactly is their end game? Where's the money for them? In privatizing SS? C-cpi being the first step in destroying it? Or is there something in it for em, it being c-cpi itself?
I don't buy Obama's excuse of offering this up to get Redundicons back to the bargaining table, "they forced me to do it!" don't fly. He's proven that the banksters come first and foremost. Ergo, if it's bankster's wishes, there's something in it. Oh what can that possibly be?