Bush Flips off the Nation: It's the oil, Stupid! 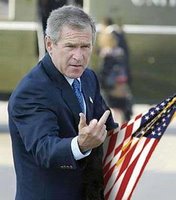 It's always been about oil —but more specifically: big oil profits! Recent big oil contracts prove it. And so do record prices at the pump.

The huge no bid contracts given Halliburton are, of course, old news. But the breaking news are the huge, lucrative contracts now awarded to British Petroleum, Shell and Chevron.I would like to hear Bush try to tell a nation that is paying through the nose for fuel that this was just a big GOP coincidence. What makes the contracts look like payoffs and war booty is the fact that in the short hours leading up to the U.S. attack and invasion, engineers from British Petroleum were busy teaching combat troops how to pump oil in southern Iraq.
Now —at a time when the Bush administration has yet to rebuild New Orleans, BP manager Robert Spears was picked to rebuild Iraqi refineries. Mind you, they were making plans to rebuild them even before the invasion. Bush, by contrast, knew that Katrina would be the "big one" and plans for the rehabilitation of New Orleans have yet to materialize or make a difference.

The beneficiaries of Bush's war policies are not confined to BP, Shell and Chevron.

There are, it would appear, no delays when it comes to looting oil from a sovereign nation.

The facts on the ground paint a different picture. BP got it's first payoff in mid-July consisting of "...one of the first tankers of oil from Southern Iraq". According to published reports, that first shipment amounted to an initial sale of 8 million barrels of Iraqi oil; and Chevron had already shipped back just as much oil. That makes a total of some 16 million barrels of oil.

Why did Bush go to war against Iraq? Oil is now money and Iraq is home to the world's second largest proven oil reserves. Experts, meanwhile, are quoted as saying that new exploration —presumably by American oil companies — will raise the reserves by some 200 billions barrels. We're talking high grade crude.

But don't expect gasoline prices to go down without extreme political pressure. The answer is to be found in Bush Sr's Persian Gulf I. Public transcripts of Ambassador April Glaspie's meeting with Saddam on the eve of his invasion of Kuwait proves conclusively that Hussein was lured into attacking Kuwait. He was told that the U.S. Took no position on his "Arab-Arab disputes". Bush Sr —upset because Hussein was pumping too much oil and thus depressing the spot market price of oil —needed a pretext to attack. Hussein took the bait and the trap was sprung. Hussein was pumping too much oil.

Meanwhile, the four multi-national oil companies in the U.S. and the U.K. are, as the brits would say, keen to get to Iraq. They had been excluded by the nationalization of 1972 when Hussein himself was largely responsible for the nationalization of Iraqi oil fields and oil processing plants. Until that time, the oil had been under the control of western oil companies. Despite the various stories that are told about Hussein, it was, after all, his country's oil.

Hussein actively modernized the Iraqi economy and created a secular society. But upon assuming power, Hussein sealed his own fate. The ruling oil oligopoly in the United States would never allow Hussein to control the oil spigot; they would never support the lower prices that would result from increased production in Iraq.

It's all about big oil and what big oil is willing to do to the world in the name of profits!

Additional resources: Bush, Oil Prices,War in Iraq
'Toons by Dante Lee; use only with permission
HOME

Damn,
Dante Lee has put a whole new spin on: "A Tiger in your tank"

Okay, is that really a non-touched photo of our president giving the finger with one hand and holding a US Flag with the other?

So, now who all voted for this guy to represent us? Hope all who voted for Bushco is proud of seeing these wonderful photos of their president who promised to bring higher morals to the presidency.

Jen, I've seen lots of "doctored" photos and, in fact, I'm no slouch with Photoshop myself...and I believe that the rude gesturing prez above is for real. That would appear to be one of his favorite gestures...there some video (on various places on the vast web) of Bush flippin' off people he doesn't like.

Yep! By contrast, Clinton brought dignity and an intellectualism to the White House that had not been seen since JFK.

Bush, by contrast, is just a crude boor.