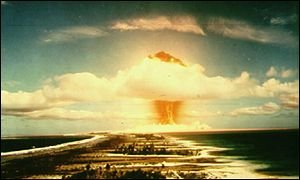 George Will has made the best case for not nuking Iran. On ABC "This Week" with George Stephanopoulos, Will said that Iran is a young society, connected to the internet, cell phone savvy, independent and aware of what’s going on throughout the world. The Mullahs, George says, cannot rule this emerging open society. Regime change will take place from within. Have conservatives re-discovered long atrophied brains —or have mainstream conservatives broken forever with NeoCons?

What might have been the case if this kind of progressive thinking had been practiced by “conservatives” before the long campaign of Saddam demonization? What if the so-called free world had not radicalized Iraqi theocrats with years of sanctions, lies, and bluster? What if the world’s most powerful Democracy had had the courage of its convictions? What if leaders of the United States had really believed in Democracy?

George Bush’s NeoCon base had best pay attention to George Will. Leaving Iran alone is, in fact, Bush’s only realistic option. There is no reason to believe that U.S. intelligence about Iran is in any way better than intelligence about Iraq. There is also no reason to believe anything said by Bush. And, at last, a bombing campaign –nukes or no –is unlikely to have any effect on Iran’s nuclear capability.

But, according to the Washington Post, reason, sanity and common sense have not prevailed in the Bush administion. The Post reports that despite Bush’s denials, the Pentagon is proceding apace with plans to attack Iran:

It's important to talk about war planning that's real. And it is for Iran. In early 2003, even as U.S. forces were on the brink of war with Iraq, the Army had already begun conducting an analysis for a full-scale war with Iran. The analysis, called TIRANNT, for "theater Iran near term," was coupled with a mock scenario for a Marine Corps invasion and a simulation of the Iranian missile force. U.S. and British planners conducted a Caspian Sea war game around the same time. And Bush directed the U.S. Strategic Command to draw up a global strike war plan for an attack against Iranian weapons of mass de struction. All of this will ultimately feed into a new war plan for "major combat operations" against Iran that military sources confirm now exists in draft form.

There is no upside gain, only painful blowback. As Will accurately pointed out, despite Ahmadinejad’s rhetoric, the Iranian populace is overwhelmingly pro-western. Bush’s loud mouth has already undone much of that good will. A bombing campaign will most certainly turn a pro-western nation into sworn enemies. A nuclear strike, in particular, will radicalize the entire population.

Already, the U.S. Invasion of Iraq has set the stage for an Iran/Shi’ite alliance. Pledging to smash the “Axis of Evil”, Bush has, rather, created the conditions for a real “Axis of Evil”. An attack on Iran will only strengthen the rule of the Mullahs who will most certainly form an alliance with the religious majority in Iraq.

Proposals to use nukes on Iran are psychotic. But we have become accustomed to hearing about vainglorious adventures from a demagogue who lied this nation into misadventure and quagmire in Iraq. On a national scale, however, nuke talk smacks of an intoxication with imperial power. That any such thing is considered seriously by some people is evidence that nothing has been learned from the debacle in Iraq. You would call a doctor an idiot who tells you to keep on doing whatever it is that’s making you sick. Why are not “Presidents’ held to the same standard?

In the meantime, Congressman Peter DeFazio has reminded the Bush administration that any strike against Iran must be authorized by Congress, presumably in the form of a Declaration of War. Bush is not likely to get one. Therefore, any campaign against Iran will be illegal –just as was the bombing and attack on Iraq. Moreover, Iran is within the letter of the Nuclear Non-Proliferation Treaty. Any attack against Iran would clearly be a violation of Nuremberg Principles, insisted upon by the United States itself. Such an attack would be a prosecutable crime against the peace.'Toons by Dante Lee; use only with permission
HOME
Posted by Unknown at 10:50 AM

You know my take on that, Len: Follow the Israeli!

Will's arguments are solid. The Dems should adopt them to argue against Bush's Dr. Strangelove fantasies.

I think they will. Will is too intelligent to waste his time coughing up GOP propaganda as he had done for years now. He "shouldda" known better. I hope that his good sense coupled with Buckley's recent comments signal a split with NeoCon domination of the right wing. I'll never be "right winger" but I would prefer to debate with a Buckley or a even a "Will" than to sink into a shouting match with a mindless, fanatic, slogan screaming ideologue.

The only time nukes were dropped was to STOP a war, not start one.
Is this not common-sensical?

As it was the "only time nukes" were dropped, no conclusion can be drawn from that fact alone, and most certainly, it is impossible to conclude that when nukes are used in the future it will ONLY be to stop wars.

The whole idea behind "tactical" nukes is to trick the world into allowing them to be used more routinely. Besides —my point is that the nukes dropped on Japan should remain the last time nukes are ever used!

So, what happened between the Iranian hostage crisis, Iran-Contra, and today? What happened to that fire of the secret love affair certain Republicans have with certain Iranians? Who are they catering to now?

To me, it sounds familiar to the whole Taliban issue when in the 1980s the US supported, armed and trained the Taliban to fight against the Russians in Afganistan. Oh, that was during the Republican White House? Hmmm.

What kind of games is our government playing with their good buddies in the Middle East now?

You raise good questions, Jen. I really began to smell a rat when Ronald Reagan armed Iran (Iran/Contra) even as Iran was listed by the State Department as a terrorist naion. Did Ronald Reagan give aid to an "enemie"? Was Ronald Reagan a traitor? Likewise, Saddam was a U.S. puppet and there are transcripts which prove that the U.S. literally baited Saddam into attacking Kuwait. Saddam fell from U.S. good graces because he was producing too much oil and, thus, keeping prices too low.

For good people with good motives, nothing about U.S. foreign policy makes sense. And certainly NOTHING said by the U.S. government about either Iraq or Iran has ever been true ...especially during the Reagan, Bush Sr. , and now the junior Bush's administrations.

Things begin to make sense, however, when it is realized that the U.S. Government no longer represents the people or their interests. It is owned and peopled by the Military/Industrial complex which is partnered with oil industry. The REAL "Axis of Evil" is Houston/Washington D.C/Saudi Arabia.

Sebastien Parmentier said...
This comment has been removed by a blog administrator.
4:12 PM

Simple, jen: the United States does not import a single drop of oil from Iran.

But the Japanese, the Chinese and the Europeans do. See, the US have secured that most of Saudi and mexican's oil goes to the United States (roughly 500 billions barrils per year from each countries equally).

Now, if Iran is subject to an umbargo, European, Chinese and Japanese exports will be -for a while- extremely expensive, while US exports will still not be cheaper than now, but a heck of a lot compared to its competitors.

it's all about economy, folks!

Len, you make a helluva point when you say
What might have been the case if [George Wills'] kind of progressive thinking had been practiced by “conservatives” before the long campaign of Saddam demonization? What if the so-called free world had not radicalized Iraqi theocrats with years of sanctions, lies, and bluster? What if the world’s most powerful Democracy had had the courage of its convictions?You might find it of interest that George Will has long held non-Neocon views pertaining to Iran joinging the Nuclear Club.

Here are my excerpts from his column of 23-Sep-04,
The Iran Dilemma, in which he says Iran
is perhaps the biggest problem on the horizon of the next U.S. president because it is moving toward development of nuclear weapons, concerning which the Bush administration has two factions. One favors regime change; the other favors negotiations. There is no plausible path to achieving the former and no reason to expect the latter to be productive.

The regime-changers have their hands full with the unfinished project next door to Iran. Negotiations cannot succeed without one of two things. One is a credible threat of force, which America's Iraq preoccupation makes unlikely. The second, which is also unlikely, is a mix of incentives, positive and negative, that can overcome this fact: Iran's regime is mad as a hatter, but its desire for nuclear weapons is not irrational.

Iran lives in a dangerous neighborhood, near four nuclear powers -- Russia, India, Pakistan and almost certainly Israel -- and the large military presence of another, the infidel United States. Iran has seen how the pursuit of nuclear weapons allows the ramshackle regime of a tin-pot country such as North Korea to rivet the world's attention. Iran knows that if Saddam Hussein had acquired such weapons, he would still be in power -- and in Kuwait. And even if the major powers could devise security guarantees sufficient to assuage Iran's geopolitical worries, there remains the regime's religious mania....

It is in the United States' interest -- indeed, the interest of all members of the nuclear club -- to keep new members out. But a mere aspiration is not a policy. The club will expand over time. U.S. policy can vigorously discourage this but must discriminate among, and against, nations... However, Iran is almost certainly going to cross it.

.... U.S. policy is that the "international community," whatever that is, "cannot allow the Iranians to develop a nuclear weapon" (Condoleezza Rice). It is surreal to cast this as a question of what anyone will "allow" Iran to do.

I vaguely recall that particular piece by Will. Will, however, often comes to the right conclusion fallaciously but more often the wrong conclusions from correct premises. This article, in particular, is a mixed bag and typical "Will". On the one hand, Will is correct in at least one important respect: no one benefits from a "nuclear" Iran. But no one in his/her right mind can expect Iran to disarm when Bush is rattling sabers —proving even maniacs like Ahmadinejad to be correct. Bush/Cheney will hold on to power by raising the spector of "Saddams" and "Ahmadinejads". But it works both ways. Ahmadinejad will do the same thing in Iran by raising the specter of Bush!

Agreed: Both Ahmadinejad and Bush are nutcase demagogues.

The only differences is the latter is our nutcase, and the former, I still have to cut & paste his freaking name!
:-)

A confession: I can't pronounce it either.

I'm not even sure Will wrote an article about it. I caught his comments on ABC "This Week" with George Stephanopoulos.

You're right about Will. He can speak with near lucidity about Disraeli and Gladstone and in the next sentence spit out a banal absurdity —and for the wrong reasons. I rolled on the floor laughing when Will attributed a quote to Disraeli...and Fareed Zacharias said: "Uh...I believe that was Palmerston!" Whoa!!! Will gets corrected on live TV. I love it.